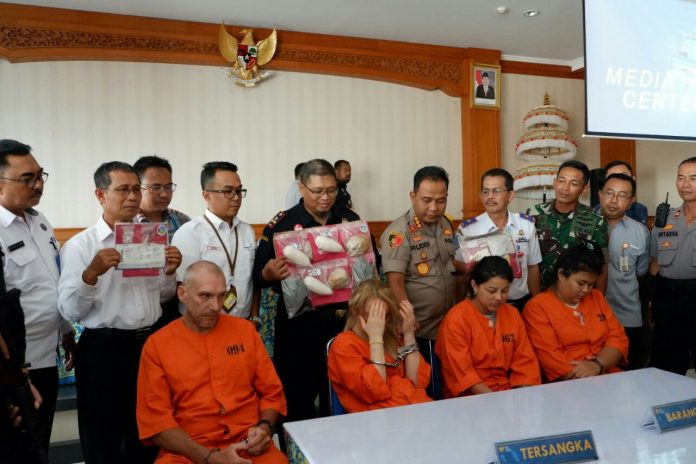 Lokadewatanews.com – Badung – Bali – Customs of Ngurah Rai successively stand foreigners from Thailand, Russia, and France in their attempt to smuggle Narcotics to Bali in mid-October 2019.

Each foreign national was found to be attempting to smuggle Narcotics preparations through different modes, namely body concealment, passenger luggage, and parcels sent by mail.

“Customs of Ngurah Rai succeeded in intercepting Narcotics supplies at the Arrival Terminal, I Gusti Ngurah Rai International Airport against 2 (two) Thai citizens on October 13, 2019 and 1 (one) Russian citizen from October 16, 2019. Coinciding with the enforcement of Russian citizens, on the same day the officers also succeeded in securing 1 (one) French citizen through control delivery of the package, “said Himawan Indarjono, Head of the Ngurah Rai Customs Office.

The confirmation of the preparation of Narcotics Methamphetamine type was carried out on Thai citizens, initials KK and SM, who came to Bali as passengers of the Thai AirAsia FD398 flight Don Mueang-Denpasar route and arrived at 01.30 WITA in the morning. The officers suspected both of them when they were going to pass the Customs and Excise examination.

KK and SM then checked their luggage through X-Ray followed by a separate body search by officers.

In addition, the results of the inspection, both were found to hide packages resembling brown capsules containing white powder with a body concealment and concealment mode in passenger luggage.

“Whereas SM was found to have 2 (two) similar packages that were stored in underpants in their luggage. Based on these findings, officers conducted an inspection of their contents at the Ngurah Customs Laboratory,” he said.

The laboratory test results showed that all of the packages were positive containing Methamphetamine type Narcotics preparations with a total weight of 958 grams (brutto), “said Himawan.

KK who is known to work as a motorbike and SM rental service provider who is a cleaning service is suspected of having violated Article 102 letter (e) jo Article 103 letter (c) of Law number 17 of 2006 concerning amendments to Law Number 10 of 1995 concerning Customs in conjunction with article 113 paragraph (2) of RI Law number 35 of 2009 concerning Narcotics.

Then deterrence was also carried out on October 16, 2019 on the smuggling attempt of Narcotics preparations of the type of Cocaine smuggled by female Russian passengers in their luggage and French citizens in package parcels.

“Customs Ngurah Rai succeeded in securing a passenger of a female TF aircraft from Russia who arrived with Qatar Airways flight QR962 on the Doha-Denpasar route at 19.30 WITA. On the same day, a French WN man, initials OJ, was also secured by officers after the package arrived in Denpasar the day before, “said Himawan continued.

TFs who arrived in Bali were suspected by officers when they were going to pass through the Customs and Excise inspection area at the Arrival Terminal, I Gusti Ngurah Rai International Airport. TF luggage is inspected through X-Ray imaging which is followed by a body search inspection by the officer.

From the results of the examination, TF was found to be carrying 1 (one) transparent tube packaging containing white powder found next to the cellphone he was carrying.

“Officers found TF stored white powder in a transparent tube in his luggage which was suspected of being a Narcotics preparation. The tube was found when a deeper examination and body search of TF by officers.

The findings were then tested for content at the Ngurah Rai Customs Laboratory. The laboratory test results showed that the white powder carried by TF positively contained Narcotics of Cocaine type with a total weight of 6.63 grams of gross or 0.14 grams of net, “said Himawan.

On the same day, French WNs were secured by officers after carrying out control delivery of a parcel post from Orleans, France. Packages with karal number LS005863674FR are known to have been sent by the sender with the name S. A. Holmann addressed to the address on behalf of the WS in Canggu, Badung.

“On October 15, 2019, on Tuesday, to be exact, Ngurah Rai Customs officers who conducted surveillance at the Indonesia Post Office. Then Bea for all international package shipments to Bali was suspicious of the results of X-Ray imaging of a parcel sent to the address of Jalan Pura Wates No. 22, Canggu, Badung.

Based on the suspicion, the officers conducted a physical examination and found white powder in the package. The findings were tested for content in the Ngurah Rai Customs Laboratory. Laboratory test results prove that it is true that the white powder positively contains Cocaine Narcotics preparations with a total weight of 22.57 grams net. “Himawan added.

Meanwhile, on these findings, officers who seek to capture the owner of the goods carry out control of the next day to the destination location of the package. However, at the time of delivery, the address shown on the package is not found. The clerk tried to contact the contact number that was also listed and successfully connected.

“The clerk managed to contact the contact number listed on the package because it was answered by a foreigner. The officer and foreign national, known to have the initials OJ, agreed to change the destination of the package delivery location to the Batu Bolong Post Office.

However, the delivery agreement was changed again to the Pererenan gas station. After waiting, the handover is carried out by the officer to the concerned. Shortly afterwards, OJ was immediately secured by the officers and questioned for his association with Cocaine stored in the package, “continued Himawan.

For its connection as the recipient of the package containing Narcotics preparations of the type of Cocaine, OJ is alleged to have violated Article 102 letter (e) of Law number 17 of 2006 concerning amendments to Law Number 10 of 1995 concerning Customs in conjunction with Article 113 paragraph (2) of the Law RI number 35 of 2009 concerning Narcotics.

“At the moment all suspects, namely KK, SM, TF, and OJ, along with the evidence have been handed over to Denpasar Police for further action,” concluded Himawan ending.(Team)